Whatever video or audio editing software you’re using, the amount of commands and shortcuts to remember is absolutely huge, but inevitable.
Often, for many of the most used functions, you get lost in a series of menus, which complexity is proportional to the importance that developers give to the GUI.

Professional users generally try to solve this problem using keyboard shortcuts, but remembering all the commands is an hard challenge.
To solve this problem many specific keyboards have been made, with coloured keys and printed icons, with the goal of helping the user to find the right command whithout using their memory.
The main drawbacks of these solutions are high price, difficult availability (especially in Italy) and the fast obsolescence made by new releases of softwares with different keyboard customization (because on the keys are printed only the default commands and shortcuts). On the other side you have generally high quality and add-ons like additional keys or controls for special functions.

Fortunately, there are some low-cost alternatives which allow anyone to change its keyboard to a professional one, specific for its favourite video/audio editing software, whith the possibility of changing more often the keyboard set. These alternatives are keyboard stickers and rubber caps.
These two solutions are different mainly in price (rubber caps generally are much more expensive) ad availability (stikers can be easily printed for any kind of software or release with low cost for the producer).

Today we will review the stiker set Editors Keys and, specifically, the set of stikers for Sony Vegas. 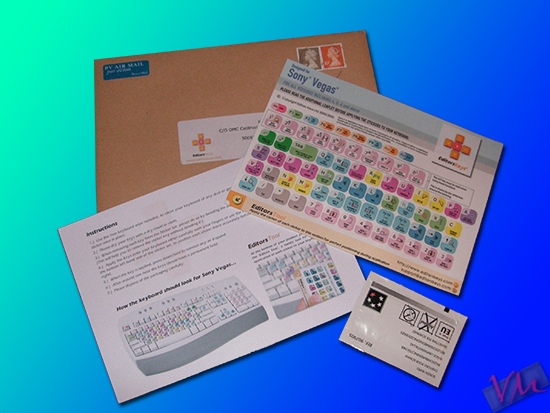 EditorsKeys.com started his activity in 2003 in Norwich, England.
Among other producers Editors Keys soon distinguished for the high quality of stickers sets and low prices.

From the beginning the major interest has been directed to the production of stikers for the most used NLE software such as Adobe Premiere and After Effects, Avid and Apple products, ad later Sony Vegas and a series of sets for the most important audio editing software like Cubase, Pro Tools, Sonar, etc…

I was interested in the Sony Vegas sticker set, so I made my order via the online form (at this moment the price for the 2007 version set is €13.99 and the shipping via Royal Mail is €3.30) and payed with Paypal.

After few days (less than a week from the order) I received an envelope with:

I have to say that the presence of the screen wipe was a positive surprise to me even if its commercial value is relative.

The stickers have an excellent printing quality and a very good definition both on text and icons.
The shortcuts are painted in different colors so that the user can quickly distinguish every single function or set of functions of the software.
Each sticker is made of 2 layers.
The first is the one with the print, the other is a transparent semi-bright layer (PVC made of 40 micro-layers) for reducing reflexes and improving fingers grip and sticker’s durability by protecting it from rubbing and sweat. 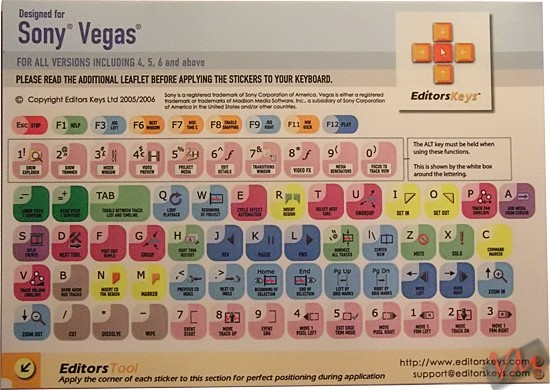 The glue on the stikers makes it possibile, during the first application, to make little corrections and does not damage the key. In fact you just need a cloth to clean it completely.