[Editoria] HDV, What You Need To Know [ENG] HDV is now a standard in video production, but the access in the market of this standard took with it some doubts caused, as usual, by the low reliability of the first implementations. By the way now HDV is an used and appreciated format (…even if there are some detractors).
Among the first and strongest fans of this format is Douglas Spotted Eagle, who also wrote one of the bestsellers about HDV: HDV, What You Need To Know, a complete analysis about the standard, the equipment and the shooting and editing situations.

The success of the book continues with this second edition, which we are going to review, which expand and update an already excellent product. 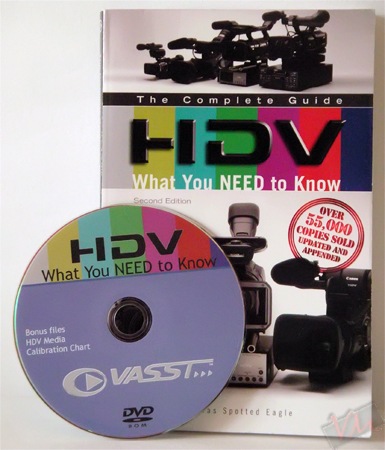 The book begins with a first chapter in which are explained, in a simple way, the main differencies between DV and HDV formats, and the typical elements of the SD video (for example PAL/NTSC standard, interleaving and progressive scan video, etc.).
We can find many useful informations about SAR (Screen Aspect Ratio), PAR (Pixel Aspect Ratio) and also on MPEG2 Long Gop technical specs, also analyzing the different color spaces.
Even if the book is clearly oriented to the NTSC area, DSE doesn’t forget to underline the differencies with the PAL world.

By clicking here it is possible to download the PDF file with the full index of the book.

After analyzing HDV technical characteristics and its differencies with DV, we find the analysis of some of the most common HDV devices.
Even if the book has been printed in 2006, it shows a wide and actual scenario of the main HDV products on the market and let us discover the evolution from the first JVC GR-HD1/HD10 of 2003 to the new Canon, through the Sony HDR-FX1 and HVR-Z1.

The book continues analyzing HDV on field, then the meaning of shooting always in Widescreen 16:9 and what to expect from MPEG2 Long Gop encoding in certain shooting situations.
Besides the book continues with a quick analisys of the standard shooting procedures of some cameras like Sony HVR-Z1/FX1, JVC HD100 and Canon XL-H1.

An entire chapter is dedicated to audio and its management and compression in the HDV format.

The part “on field” of the book ends with the presentation of various types of useful equipments and accessories for HDV cameras.

The book then focuses on the editing and post-production HDV workflow, analyzing Chromakey with HDV cameras and some useful technics for obtaining a good Film-look.

Then we have a chapter that guides the reader to choosing the right HDV editing system, then Douglas Spotted Eagle continues analyzing the HDV workflow of the main NLE (Non Linear-Editing) softwares on the market.
An entire chapter is dedicated to advices on integrating graphic in HDV video.

The analysis of the HDV format ens with the current technologies of High Definition (and then HDV) video playback, useful for the final chapter dedicated to HD/HDV distribution both with SD (Standard Definition) downscaling and directly in HD (High Definition).